My first introduction to Gee was through my involvement with the University of South Florida’s Cambridge Schools Experience. There I sat, nodding in half-comprehension of the conversation around me, when I heard a name fly over my head to the person across the room, “Gee!” …. Who?…. I didn’t realize it at the time, but I was experiencing apprenticeship into what Gee refers to as a Discourse (big “D”) community (Gee, 2013). This was a Discourse of academia, and I was still (am still!) approximating the language. 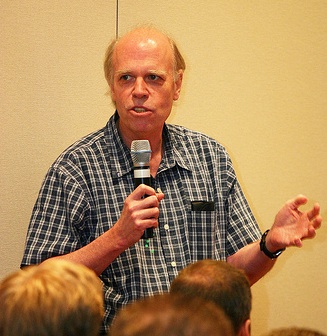 Gee tells us that we are part of many different Discourses (big “D”) over the course of our lives. These are like “identity kits”. They include ways of talking, listening, writing, reading, acting, interacting, believing, valuing, and feeling (Gee, 2013, p. 143). However, we also use discourse (little “d”).  Gee defines discourse (little “d”) as “language in use” (Gee, 2013, p. 143). So right now, I’m using discourse to communicate with my Discourse community of language, literacy, and new literacies readers!

Ok, so I belong to a Discourse community. What does this have to do with teaching? This is where context comes into play. To understand Gee’s position on situated language, we first have to explore primary and secondary discourses (Gee, 2008). Your primary discourse is typically developed at home, around family; it is being a part of something and your foundation to identity. Secondary discourses, of which we may have many over our lives, are developed through institutions such as school, work, religion, etc. These are often influenced by our primary discourse. For example, a child who developed a primary discourse as part of a low socioeconomic-status family may have difficulty developing a secondary discourse in school because these two Discourses do not align well with each other. Confused? Here’s a fun video to explain, as long as you don’t mind the 1980’s video game background music (I think Gee would approve of the use of gaming music however. You’ll see why shortly!):

But back to situated language. Gee proposes that language is never neutral. All language has specific meaning when situated within context. Our many Discourses, both primary and secondary, affect these contexts. Here’s an example from Gee (2013):

What did you see? Depending on the context, we’re either going to be frustrated with the wrong tool (broom for wet coffee?) or understanding of the language (maybe it was coffee beans!). How does this relate to literacy development? Well, if language is always situated within context, then there must be more to reading than repetitive, behavioral processes that only rely on letters and words. The meaning of language, according to Gee (2013) depends on sociocultural factors of Discourse communities.

Gee brings his work with situated language and how we, ourselves, come to be part of Discourses that both shape and reflect our identity, into the conversation of new literacies. To list the expansive collection of publications Gee has on this subject would be impossible in a single blog post, so I’ll steer you towards his website which houses a plethora of resources should you find yourself with an inquisitive mind and an empty “to-do” list: jamespaulgee.com

Literacy is always situated in context according to Gee (2003). He ties in sociocultural theories of reading development with his focus on multiple literacies to argue that the type of literacy we use depends on the media we’re interacting with in addition to our perspective, which is derived from our identity and Discourse communities.

Gee also focuses on how gaming culture can be applied to learning situations (2003). He argues that a good video game provides the framework for developing student motivation, perseverance, and success. I’m not going to do his work with video games justice, so I encourage you to watch this 5-minute video and hear it from the scholar himself (you’ve made it this far, don’t give up on me now!):